The Law Requires You to Stop at the Scene

If you were involved in an accident and left the scene without exchanging information, you may be prosecuted for Hit and Run under 20002a CVC.  Regardless of whether there was personal injury or just minor property damage, California law requires anyone operating a motor vehicle involved in an accident, whether just property damage (2002(a) CVC) or with personal injury (20001(a) CVC) to stop at the scene and exchange current name and address, and if injury, to render “reasonable assistance”.

Leaving the Scene of the Accident 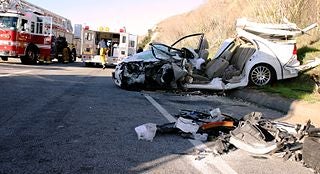 Most cops treat a hit and run as a suspected DUI, and will try to locate the involved driver as quickly as possible.  Since there is a legal presumption that a chemical test for DUI is accurate for the time of driving if obtained within 3 hours, this is a good general rule for how quickly officers want to locate drivers involved in hit and run collisions.

Of course, there are many other reasons a person might leave the scene of an accident, such as their own medical needs (a legitimate defense to hit and run allegations), as well as to avoid embarrassment, civil liability, or they legitimately were not aware they were involved in an accident.

Your Abandoned Car Works Against You

If a car involved in an accident is rendered un-drivable or left behind at the scene of an accident, responding officers will typically run the information of the registered owner and quickly arrive at their residence in hope of evaluating the driver as quickly as possible.  If the cops cannot locate a driver in a 3-5 hour window, their focus then turns on whether they can establish the identity of the driver, beyond just being the registered owner.

It is not uncommon for police to have involved vehicles towed and stored with an evidence hold, preventing the owner from recovering the vehicle until released by the police.  This is a common way for law enforcement to try to get a person to admit they were the driver of the vehicle, by holding the car “hostage” until such damaging admissions are made.  You do NOT have to surrender your 5th Amendment right against self-incrimination to retrieve your vehicle, call me immediately.

There are Good Defenses Against Hit and Run Charges

Even though the registered owner is presumed liability for damages caused by a vehicle, this presumption is rebuttable by showing other people had to access to the vehicle at the time of the accident.  If there are no eye-witnesses to the person driving during a collision resulting in a hit and run, often the police will not be able to prove beyond reasonable doubt the identity of the driver.  The actions you take and statements you make following an accident can be critical, and having the advice and protection of an aggressive attorney can make the difference between an arrest or conviction, or a simple exchange of insurance information.